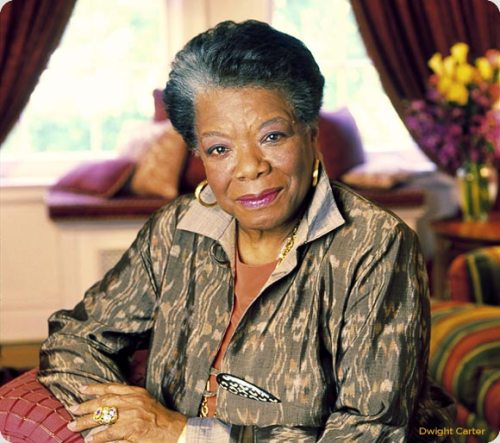 Maya Angelou is another Oprah favorite.  As a teenager, I used to hate how people flocked to eat up anything that Oprah endorsed.  Now, though, I can appreciate what Oprah did with her book club.  She exposed people to amazing literature and got her viewers to check out some classics.

I never explored Maya Angelou’s work outside of the poems that showed up in our school textbooks, but just the two poems below are enough to make me want to read more.

Lying, thinking
Last night
How to find my soul a home
Where water is not thirsty
And bread loaf is not stone
I came up with one thing
And I don’t believe I’m wrong
That nobody,
But nobody
Can make it out here alone.

There are some millionaires
With money they can’t use
Their wives run round like banshees
Their children sing the blues
They’ve got expensive doctors
To cure their hearts of stone.
But nobody
No, nobody
Can make it out here alone.

Now if you listen closely
I’ll tell you what I know
Storm clouds are gathering
The wind is gonna blow
The race of man is suffering
And I can hear the moan,
‘Cause nobody,
But nobody
Can make it out here alone.

When I was young, I used to
Watch behind the curtains
As men walked up and down the street. Wino men, old men.
Young men sharp as mustard.
See them. Men are always
Going somewhere.
They knew I was there. Fifteen
Years old and starving for them.
Under my window, they would pauses,
Their shoulders high like the
Breasts of a young girl,
Jacket tails slapping over
Those behinds,
Men.

One day they hold you in the
Palms of their hands, gentle, as if you
Were the last raw egg in the world. Then
They tighten up. Just a little. The
First squeeze is nice. A quick hug.
Soft into your defenselessness. A little
More. The hurt begins. Wrench out a
Smile that slides around the fear. When the
Air disappears,
Your mind pops, exploding fiercely, briefly,
Like the head of a kitchen match. Shattered.
It is your juice
That runs down their legs. Staining their shoes.
When the earth rights itself again,
And taste tries to return to the tongue,
Your body has slammed shut. Forever.
No keys exist.

Then the window draws full upon
Your mind. There, just beyond
The sway of curtains, men walk.
Knowing something.
Going someplace.
But this time, I will simply
Stand and watch.