I first discovered Sylvia Plath while I was suffering through my junior year of high school.  Up until this point in my life, I always loved my English Literature classes, savoring the 45 to 60 minute intervals each day (or 90 minutes every other day once I hit high school) when I could lose myself in the intricacies of plot, mood, grammar, spelling, and the list goes on…  As a kid who always loved writing and reading, citing as my two favorite activities since the age of six, how could I not?  Due to my passion, I always seemed to excel at the assignments, as well, which is always a plus as a kid in school.

My junior year, however, was very different.  First, I got Mono.  I have no idea how this ailment struck me, as I hadn’t been kissing too many boys, save for the Amusement Park Ride Operator from Canobie Lake Park.  Come to think of it, he was what one would call a “man-whore”, so maybe that explains it.  Either way, I was barely able to sit up off the living room couch for two weeks early on in the year.  Somehow, though, I managed to get myself caught up fairly quickly and not leave myself in the bad graces of any of my teachers.  A few months later, though, when my parents couldn’t cart me into Worcester (from Clinton) due to the death of a good friend’s son, something changed in my American Literature Class.

I was accused of skipping class and was barked at, quite forcefully, one afternoon after home room.  Pair this with my inability to properly write an Expository Essay (there was a VERY particular formula that we were demanded to follow) and the fact that, well, I couldn’t give a damn about The Great Gatsby or Huckleberry Finn.  And when it came to struggling through The Scarlet Letter, forget it.  I would have rather swallowed nails than sift through the never-ending descriptions of Hester Prynne’s trials and tribulations.  To this day I can’t really tell you how I actually passed that year, but it would definitely be classified as barely.

My interest was successfully captured, however, once we came to the Confessional Poets.  Of course, we only spent half of a class on them, but whenever we had the free reign of choice for paper topics, I leapt at the chance to dissect Lady Lazarus and Daddy.  When I first picked up what Sylvia Plath was throwing down, I was officially floored.  I couldn’t believe it.  Like so many other young women, I felt like she was speaking directly to me.  I felt like she had glimpsed into my heart, ripped out all of my deepest emotions, fears, and passions and exposed them through her poetry.

Upon learning of my newfound obsession, though, my mother was relatively dismayed.  In hindsight, I suppose that I would have been a little distraught if my teenage daughter, seemingly depressed and socially anxious, chose to dive into the music of Nine Inch Nails and poetry of Plath.  But while she feared that the macabre imagery, biographical details of suicide, and other general darkness was pushing my further into my self-imposed isolation and uncontrollable lamentations over the injustices of being a teenage girl, these poems were actually “saving” me from falling off the precipice into self-destruction.

For the first time ever, I felt like I had someone who knew where I was coming from and who wouldn’t judge me for how I felt, what I believed in, or the path that I would have enjoyed my life to go down.  Plath was my confidante, my voice, and an understanding “ear”.

Immediately, and for the purpose of class, I ran out and purchased The Collected Poems and carried it with me everywhere.  Shortly    thereafter, I picked up Letters Home and The Unabridged Journals.  At some point, I found The Bell Jar and Johnny Panic and the  Bible of Dreams.  Later on, becoming more of a hardcore lover of her writing, I sought out her children’s books, cherishing and re-  reading them, imagining sharing them with my children someday.

Additionally, I sat through almost the entire Bell Jar movie (because, for some reason, the local mom & pop video store still carried    the VHS).  And if you’ve EVER even watched a few minutes of that film, you understand that it’s a big deal that I sat through thirty  minutes of that garbage, but I was consumed by a fever that called for Plath, Plath, and more Plath.  So, I indulged, eventually  branching out to reading Ted Hughes (her ex-husband), Anne Sexton and Robert Lowell (fellow Confessional poets that she took  classes with around Boston), and her daughter, Frieda.  I traveled to New York City for the sole purpose of visiting a Ted Hughes and Sylvia Plath display – No Other Appetite – displaying an array of their personal effects and detailing the story of their tumultuous, yet passionate, courtship and disastrous marriage and parting.  Hell, I even got her signature tattooed on my back.  That’s dedication.  Or insanity.  You can make that call for yourself.

I want everyone to have their own Sylvia Plath – that one writer (or artist of any medium) that just makes complete and perfect sense to you.  The one person that completes the literary world for you; you couldn’t imagine existing, and reading, without having ever come across their work.  It’s magical.  It’s inspiring.  It’s both breathtaking and heartbreaking.  They hold the power of forcing you to experience the full breadth of human emotion…. solely with their words.

I’ll close this post with a poem.  It’s not a Sylvia Plath poem, but it’s by Ted Hughes and featured in his collection Birthday Letters, which was the first that he “spoke” about his relationship with Plath after her suicide.  It’s also the inspiration for the name of this blog and the Grolier Club exhibit in NYC that I visited a few years ago.  It is one of my all-time favorites – powerful, seductive, and frightening. 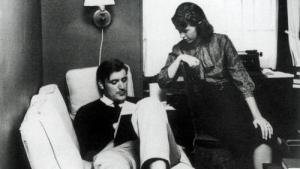 He loved her and she loved him.
His kisses sucked out her whole past and future or tried to
He had no other appetite
She bit him she gnawed him she sucked
She wanted him complete inside her
Safe and sure forever and ever
Their little cries fluttered into the curtains

Their heads fell apart into sleep like the two halves
Of a lopped melon, but love is hard to stop

In the morning they wore each other’s face

One response to “Favorites: Sylvia Plath”